At half past six Yuriy Shamray is already in the poultry house – this is how his every morning starts for almost four years, ever since he started to breed poultry.

He cleans the cages, inspects all the birds, checks the incubators, feeds the birds, gives them water and removes the freshly hatched chicks if necessary. Those who have domestic animals know that it is not with coffee that the morning starts. And now imagine that you have more than five thousand domestic animals.

Until 2014, Yuriy lived in Marinka and worked in Donetsk. He delivered medications to pharmacies. When the armed conflict in east Ukraine began, he had to quit his job as the front line carved between his home and his work. Almost a year passed, and everything calmed down a little, people got used to living in new conditions. Yuriy and his family were keen to stay. But what to do with work? Even during the best years, there hadn’t been much work in the village, but after the beginning of the armed conflict it became impossible to find a job that could provide for the family. This is why Yuriy spent several months studying different business possibilities.

Yuriy’s brother was breeding quails, but only for his own needs. Yuriy decided to make a business out of it. He reorganised his summer kitchen, assembled the cages by himself, found fodder suppliers and bought a small incubator. It was not easy at the beginning, as always when you start a new activity, but patience, interest and support from the family can help you to deal with anything. The first lot was followed by the second one, and then the third and the fourth…Yuriy developed a distribution network. Moreover, the clients were asking for more, and for this he needed to expand his production and to buy new incubators.

Yuriy tried to assemble them by himself. The last and the most convenient incubator was made from a freezer unit. But this handicraft equipment did not allow to keep the temperature and humidity stable, which had a negative influence on the quantity of hatched chicks and did not help to keep them alive. Yuriy was losing around half the litter.

The cost of a proper new incubator was around 20,000 hryvnia (some 650 euros). Yuriy had nowhere to take this money from, but he heard that some international humanitarian organisations were giving grants for business development. An Internet search gave only one option which suited his request: ‘Enhancing Youth Education, Employment and Participation in Conflict-affected Areas in Georgia and Ukraine’, a programme implemented by the Danish Refugee Council (DRC) in partnership with Mariupol Youth Union and funded by the European Union under its EU4Youth Programme. Yuriy was used to count only on himself and this is why he was not hoping for luck, but nevertheless he decided to submit his application for the participation in the project.

“When we came to visit Yuriy at his work place we were impressed by the diligence and determination of the young entrepreneur,” says the specialist of the Danish Refugee Council Anastasia Kozyreva. “Yuriy created a mini farm on a small household plot gaining some additional space by removing the summer kitchen. Right in the middle of the preliminary interview, the neighbours were coming to us and asking Yuriy to sell them some poultry. We could clearly see how sorry they were that the young farmer couldn’t help – existing conditions did not allow him to increase the quail stock, he needed to expand his business.”

The business development grant that Yuriy received in the framework of the EU4Youth project allowed him to buy a new good quality 1,000 egg incubator. The new incubator allows him to have not 50-55% hatched chicks as before, but 65-70%. Makeshift incubators cannot get even close to such numbers. Moreover, the chicks became stronger, more active and developed better.

The quantity of chicks increased and Yuriy’s income respectively. But there is still a lot of work to do. That is why Yuriy plans to solve several crucial problems in the near future. First of all, he wants to build an additional big unit in order to be able to grow more poultry and to satisfy the demand of customers who are complaining that sometimes they have to buy extra poultry from other farmers and their quality is not always good.

“A small family business has turned into quite a big poultry farm for a frontline region,” says the EU4Youth project coordinator in Ukraine Oleg Vishnevsky from the DRC. “What makes us happy is that the business reached such a level that he can hire local people to take care of the poultry. Yes, it is only a few people for now, but it is important for the village with a high unemployment rate. This is how a seemingly small financial help can not only increase the income of an entrepreneur, but also favour the economic resilience of a village in general.”

“I am grateful to the European Union for the support,” says Yuriy. “Thanks to it my family’s income increased, as well as our confidence about the future, and this is more important than any money. I would like to wish the European Union to continue their successful work in this direction, because I know for sure that young people from our region still need help to develop self-employment.” 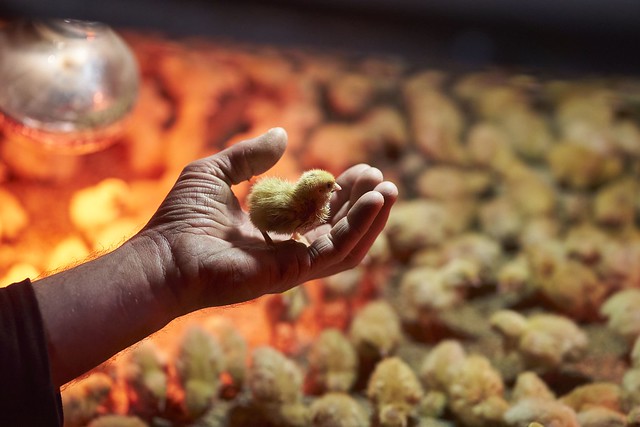