The unemployment rate is high in Armenia. Many people, mostly men, leave the country to earn money and provide for their families.

Usually, their wives and female members of the family remain stay-at-home mothers whose main responsibilities are to raise children and maintain the house. Through implementing projects in Armenia, the EU assists the creation of new workplaces and encourages locals to learn and work in their hometowns.

Amasia, Shirak province, is known for its sheep breeding traditions. The village residents have been breeding sheep for centuries but, in recent years, they have thrown the wool away. It was becoming less profitable to keep the sheep, which is one of the reasons that people started searching for jobs outside of the country. As wool is in high demand in the country and can help the locals to earn money and open new workplaces, the European Union funded the wool processing factory in Amasia through the Pilot Regional Development Programme (PRDP), contributing €335,000. The wool factory has revived national Armenian traditions.

The residents of Amasia were informed about the project and taught how to produce quality wool that met particular standards so that so that the factory can buy it. This support is crucial for Shirak, which is known as the poorest province in the country.

The wool factory turned out to be the first workplace for most of the people who are now working there. Special training courses were organised for those looking for a job and interested in the craft. The participants learned the basics of working with wool and, after completing the course, the best students received job offers.

The factory produces two kinds of carded wool, which are used in spinning and making thick felted wool. It also produces threads which have seven different natural colours. The factory plans to colour the threads using only natural materials in the future.

36-year-old Narine Sahakyan has had various jobs. She has worked as a cook, a tailor, a nurse and a hairdresser but she has never had a full-time job. Last year Narine received a call from the local municipality offering her an opportunity to attend a training course for the wool factory.

“At first it was very difficult to learn to use the spinner but I have managed it and now, for the first time in my life, I have a job,” says Narine, adding that she had always planned to work but being a mother of two meant she could not find a proper job. “It was very encouraging to receive my first salary, as you have a sense of responsibility and now I contribute to the family budget.”

She believes that the wool factory affects more people than it may seem. “It is a great opportunity for agriculturists. We did not use the wool, we were throwing it out or giving it as a gift. But now we can make money out of it,” explains Narine.

After 21 years of working as a bookkeeper, 52-year-old Satenik Kyureghyan tried working in different fields but, in order to raise her children, she had to leave her job and become a housewife. Now, she is back at work and enjoys her new role as a textile worker at the factory.

“If you want to work, anything is possible,” says Satenik, adding that it was hard for her to switch professions but over the time she started to enjoy it. “It’s very important for me to have a job, to change my environment and meet new people. I feel human again.”

Satenik emphasizes that it is very difficult to find a job in Amasia. Her children, who have gained higher educations, are unemployed and her husband moved abroad to earn money. Satenik hopes that the factory will develop and more people will have the chance to work there, to earn money and to contribute to the development of their town. “This is our hometown and we need to do our best in order to set an example for other people to stay here and work.”

The project also provided subgrants to open more workplaces in the province. Out of 26 applicants, four people received grants to open small or medium-sized enterprises in Shirak, which will buy products from the factory and create jobs for locals.

Heghine Adamyan was working abroad and learned about the project soon after she returned to Armenia. She wanted to create handmade carpets in Armenia and export them. She now plans to establish a carpet factory in Shirak offering 16 jobs. “Shirak was known for its carpet-making traditions. During Soviet times, there was a factory and 80-100 carpet weavers worked there. It was destroyed by the earthquake. I decided to fill the space and try to continue the tradition,” says Heghine. 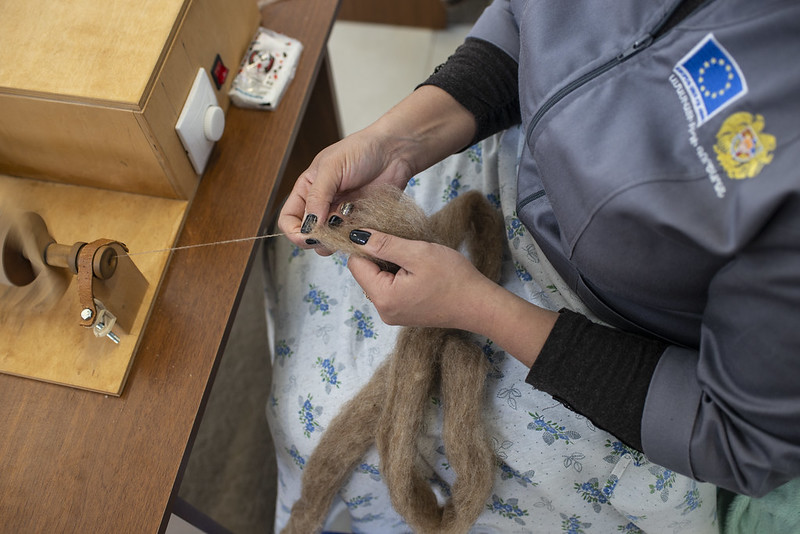 The factory is going to buy materials from the wool factory. Heghine has seen the products and believes they are affordable and of good quality.

By opening the wool factory, the European Union not only helped people to earn money but to make quality local products. The jobs and opportunities will encourage locals to change their minds and not to migrate. This will help the rural community to develop and become an inspiration for the other parts of the country.

Article published in Armenian, Russian and English by Aravot.am