If a decade ago biofuel production in Moldova was an unknown sphere, today, thanks to the expertise and financial support of the European Union, it is a growing sector with great prospects. The company “Ecobricheta” SRL from the Bălţi municipality is proof of this, becoming a well-known biofuel producer that manages to turn waste into an green energy source.

Ecobricheta is truly a family business: Ludmila Abramciuc and her husband Ivan Damaschin, as well as their three children – Victor, Cristina and Maxim – have all contributed to its growth and development.

Guided by intuition and business sense and encouraged by what they had seen in European Union member countries, Ludmila and Ivan learned to make money from agricultural and wood waste, turning it into an efficient and clean energy source.

“The beginning, in 2008, was difficult”, recalled Ludmila, “given that this area was a new one for the Republic of Moldova and people were really sceptical of heating with another type of fuel, since they already had access to gas or coal.”

“Initially, we were distributing leaflets to people about this new possibility for heating their homes, and then we contacted people who had showed an interest, presenting our products and explaining what the benefits of biofuel heating are compared to natural gas, wood or coal”, explained the businesswoman. “Gradually, the ice broke, people became more and more interested in these products, and we expanded our business. We now produce in a day the amount of briquettes and pellets we were producing in a month at the beginning,” she added.

The company’s first equipment was purchased from Italy, with a production capacity of only 100 kg of pellets. Later, the couple was selected as beneficiary of the Energy and Biomass Project, funded by the European Union and implemented by the United Nations Development Programme. They bought new biofuel production equipment thanks to a 3-year, 0% interest loan of € 15,000 provided by this project. “This helped us develop the business, because at that time banks did not provide attractive loans for businesses because they didn’t see any prospects in this field,” explained Ludmila. Ecobricheta is one of the 35 beneficiaries of the EU-funded leasing programme.

Until recently, agricultural waste was a source of environmental pollution given that it was burned. Now, the waste is in great demand, becoming the main source for biofuel production. The company purchases sunflower seed shells and other types of agricultural waste from producers in the northern region of the country. With the help of high performance equipment, these are turned into briquettes and pellets, used to heat both households and public institutions. Today, thanks to the support of the Energy and Biomass Project in Moldova and the corresponding EU funding, 206 schools, kindergartens and public institutions have biomass boilers installed and are heated with renewables. This not only promotes green energy, but also protects the environment from the harmful effects of waste incineration – an intensively promoted objective at European level.

Ludmila Abramciuc talking about her business.

Maxim and Victor are proud of their parents’ “green energy” business in Moldova.

However, Ludmila’s plans did not stop there. Ecobricheta has also recently leased 65 hectares of land for a period of 30 years, where she plans to plant willow trees as an energy crop. This will secure much of the raw material needed to produce biofuel.

Today, after almost a decade of activity, the company can produce 20 tonnes of biofuel daily, which would meet the heating needs of 80 schools. Fully 80% of biofuel is purchased by households in northern Moldova, and 20% by public institutions. Currently, the company has contracts to provide 20 kindergartens, town halls and social facilities with biofuel.

“The results obtained so far wouldn’t have been possible if we had not benefitted from European experience in the production of this type of energy. We attended several seminars, where foreign experts explained to us how to initiate and manage a business in this field. Afterwards, we were convinced of this by visiting several companies in Poland. Sometimes, money is not as important as experience,” says Ludmila.

Even if it has substantially increased its biofuel production, the company finds it hard to meet demand, much of which comes from household consumers who are replacing gas boilers with biomass ones. Every year, more and more people are convinced that biomass heating is more cost-effective, more efficient and more environmentally-friendly, and hence demand is constantly on the rise. “A tonne of briquettes costs around € 120, enough to heat a house for several months, depending on the temperature outside. Thus, monthly costs are significantly lower than using gas, wood or coal,” acknowledges Victor Rusu from the village of Belicenii Vechi, Sângerei district, who came to Ecobricheta to buy briquettes for the coming winter.

The 5,000 m2 of production space acquired this year in an industrial area of Bălţi municipality allows the company to provide stable jobs to around 30 people. “Waste must be used smartly. Its processing means, first and foremost, the chance for people to pay less to keep warm, and secondly, a way to protect the environment. For us, this means a job, here, at home,” says Ecobricheta employee Alexandru Timoşin.

Production of biofuel at “Ecobricheta”.

Ludmila would like to continue to apply the green energy experience of the EU member countries in Moldova: “Among our future plans is the alignment with European standards across all areas of production, not just in terms of the quality of briquettes manufacturing, which is the key to our success. We plan to develop and turn the area where our production premises are located into a green space, to install windmills, even small ones, or solar panels, as is the case in many countries in Europe. We plan to transform this area into an oasis of greenery, where sustainable energy is promoted.”

Being optimistic and energetic, Ludmila Abramciuc has managed to develop a growing business in a new and unknown sector for Moldova. “If we stay still, nothing happens. We need to show initiative, think positively, and give those around us a worthy example to follow,” she says.

Ecobricheta is just one example of how green energy can become a successful business. With the support of the EU’s Energy and Biomass Project, 35 companies producing and exporting biofuel have been created in Moldova. Another 70 companies have been created independently after being inspired by other success stories. In recent years, the European Union has allocated more than €1,000,000 to the development of the biofuel production sector in the Republic of Moldova and the promotion of green energy, which is now used by some 174,000 people in the country.

Article in Profit.md in Romanian. 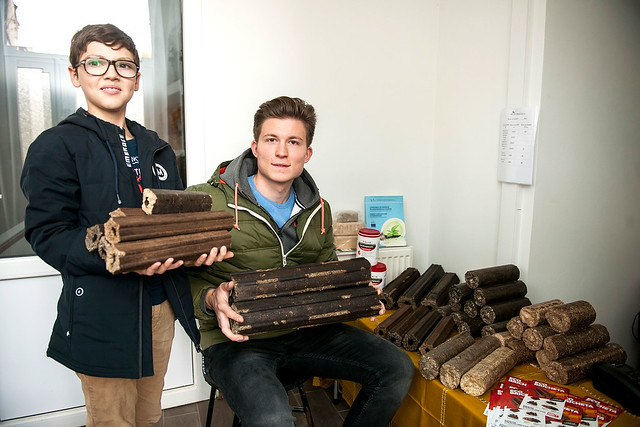